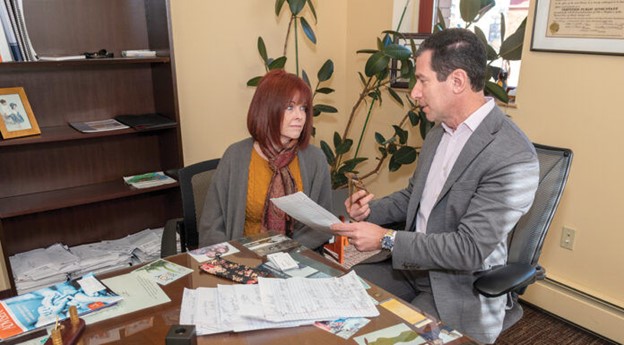 But he’s never applied for a new job.

Instead, the company he works for has changed because of a series of acquisitions, turning his first job at a 20-person accounting firm into what is now a 7,000-person company ranked in the top 10 accounting firms nationwide.

Fontes is not alone. “Upward mergers” have gained popularity in the accounting world, letting small and midsize firms meld into larger organizations that have a wider array of resources while also giving smaller-agency executives approaching retirement another way to cash out when there’s a lack of younger managers to take the reins.

“In the last two years, the number [of acquisitions] has probably doubled,” said Melissa Travis, CEO and president of the Rhode Island Society of Certified Public Accountants.

She expects the trend to continue as smaller agencies struggle to provide the many financial services that customers now demand.

These days, it’s not just about tax returns and audits. Clients are looking for consulting services, wealth management advice, and international trade and cryptocurrency expertise. A small firm would be spread too thin to provide it all.

For example, a yearlong subscription to Alteryx, a data analytics software popular in the accounting field, costs over $5,000 for a single license, said Daniel Ames, an accounting professor at Johnson & Wales University.

“It’s a lot to ask a local firm to develop all these areas of expertise and have access to the technology,” Ames said.

When asked for those kinds of services, Restivo Monacelli used to send clients elsewhere.

Not only did that mean losing potential business, but the firm had no control over the quality of those services, said Steven Monacelli, the firm’s cofounder and partner. Monacelli thinks those problems have disappeared now that New Jersey-based Withum has acquired Restivo Monacelli.

Access to top-tier resources also makes life easier for accountants, who face everchanging regulatory policies made even more complicated by the pandemic.

When Thomas E. Lisi was a partner at Yarlas, Kaplan, Santilli, Moran, he’d often have to do his own time-consuming research. Now as managing partner of Marcum’s Providence office, Lisi receives internal briefs from the firm.

“At Marcum, I get a white paper every week,” Lisi said. “There’s a big difference between going through a white paper in a half hour or hitting the books myself for 10 [hours].”

And unlike in other industries where acquisitions can mean layoffs, that’s not often the case in accounting, where short-staffed firms need more help as demand increases.

Not everyone is sold on the benefits of going bigger, though.

Jason DaPonte, managing partner at Providence-based Sansiveri, Kimball & Co. LLP, feared the loss of autonomy that accompanies being bought out.

“We like being able to control our own destiny in what we want to do for ourselves and for our clients,” DaPonte said.

The 55-person firm has held its own against national competitors by creating what Travis called “a strong bench” of mid- to high-level employees with diverse expertise who can take over leadership roles as needed.

Indeed, succession worries are motivating partners of smaller firms to accept merger deals. More than half of multi-person firms in the U.S. say they face succession challenges, according to a 2020 survey commissioned by the American Institute of Certified Public Accountants.

“If you’re looking to retire and get some compensation for what you built over the past 30 to 40 years, it’s increasingly becoming one of the only options available to merge with a larger practice,” said Jaclyn Boichat, an associate professor in JWU’s Department of Accountancy.

Having spent most of her career at top-100 firm Kahn, Litwin, Renza & Co. Ltd., Erica Guatieri saw an opportunity to fill what she predicted would become a void of locally owned accounting companies when she opened her own firm in 2018.

Guatieri goes after the local restaurant or salon that doesn’t need analysis powered by artificial intelligence or international tax planning but wants a personal touch.

“My first five minutes with a client is not talking anything about their business or their books,” she said. “It’s about their family, what’s really going on in their lives.”

Nancy Lavin is a PBN staff writer. Contact her at Lavin@PBN.com.